Breaking down this sell-off, among the most extreme and rare Wall Street has ever seen

The crash that no one called has investors calling back to earlier cataclysms, grasping for historical threads that can serve as a guide for what markets and the economy might be facing.

Saying no one called this market collapse isn’t to ignore the fact that plenty of observers and investors sounded alarms about the global health and economic threat from the Covid-19 outbreak as it hit China. But the swiftness of the economic shutdown and violence of the U.S. market’s 30% drop in a month were not foreseen by many who had not already been wary of the market for other reasons.

The brutality of the equity-market sell-off has been so extreme and rare in its breadth and velocity, in fact, that no one would dare have predicted it in detail.

Investment-grade corporate-bond risk spreads have burst with record speed from historic lows to levels that roughly price in recessionary default rates. The number of daily S&P 500 index swings of 4% or more hit a post-World War II record. The loss in U.S market value in a month and a day is near $10 trillion.

This extreme downside momentum often occurred in the general area of the most indiscriminate and forceful liquidation phase of a bear market — when the largest proportion of stocks were blindly unloaded and when volatility peaked. But in no case so far were these moments when the ultimate low was reached for the index itself, which often came months and sometimes many percent later.

Analysts have been combing over the prior relatively undiscussed periods when a global pandemic coincided with a nasty market drop. The Spanish Flu pandemic of 1918 occurred as the stock market shed 33% in a rapid flush, which took two years to recover. But, yes, there was also the most destructive global war to date raging at that time, so comparability to today is questionable. 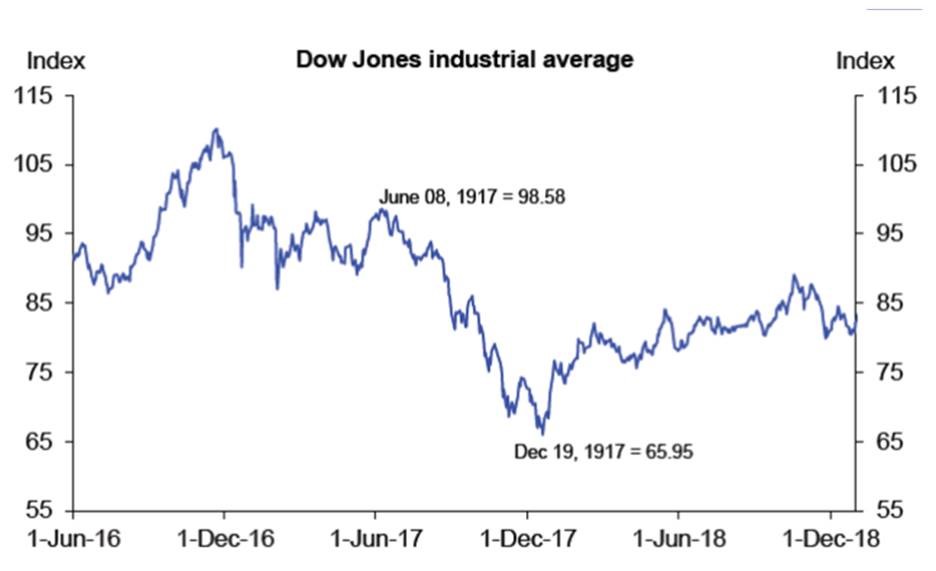 Torsten Slok, economist at Deutsche Bank, says, “Today, we may see a stronger rebound because of a more aggressive fiscal and monetary policy response. We could also see a more muted rebound as consumers and corporates rebuild cash levels, or because of a longer-lasting negative impact on corporate bond markets, or because of the unusual liquidity-driven negative correlation between equities and long rates.”

Others cite the 1969 Hong Kong flu outbreak, seen as a trigger for a swift 36% decline in the S&P 500 from an all-time high ahead of a brief recession.

Stocks recovered relatively quickly. But there was no forced shutdown of the economy as there is now, with an instant evaporation of hundreds of billions in commercial activity throwing healthy companies into peril and casting millions into unemployment.

These features have Barry Knapp of Ironsides Macroeconomics harkening to the nasty but brief recession of 1980. “Like March of 1980, the government has put the economy into a coma to try to cure a difficult problem. In 1980, the problem was the Great Inflation, and the Carter administration’s restriction of credit plunged the economy into a short, sharp recession to very little effect. In 2020, the contraction might turn out to be even deeper than the 8% [second-quarter 1980] plunge in GDP; however, it is likely to slow the spread of the disease and save lives.”

The 2008 crisis echoes are loudest to many, both because the trauma remains fresh and because we’re seeing some of the same clogs and ruptures impair the capital markets’ circulatory system.

Trillions of dollars in investment strategies premised on muted volatility, ample demand for corporate credit, an inverse relationship between stock and bond prices and ample liquidity have come unspooled.

Everything that’s not cash has been redeemed for cash – even ordinary money-market funds have been liquidated in favor of safer Treasury money funds. The Fed is now buyer of last resort in Treasuries, commercial paper and municipal debt. Fixed-income exchange-traded funds have strayed from their underlying net asset value as investors throng the exits faster than funds can sell assets.

All this serves both to stoke volatility and trigger panic signals that are at least one ingredient in markets locating some kind of trading low — even if a disorderly and fragile one.

As for stocks, they remain comparatively easy to sell. There is an enormous financial, commercial and human-capital loss accumulating by the day in this economy. Prices of publicly traded equities and corporate bonds are the most immediate way such a loss can be registered.

Analysts who track the activity of various systematic funds now say the leveraged stock-bond “risk-parity” players have largely completed their purge, taking equity exposure toward financial-crisis lows — a small net positive for the prospect of stocks finding some relief.

Trend-following hedge funds are heavily short this market, which makes sense and remains a source of downside pressure unless and until a major rally or policy move interrupts the adverse feedback loop they are riding.

It was possible last week to squint and see tenuous signs that the tape was gaining intermittent traction. The S&P lost 15% but with far fewer individual stocks making fresh lows. When the S&P slouched to a 4% loss Friday, it came on better market breadth and lower volume than prior down days. The Cboe Volatility Index ebbed to the mid-60s from above 80.

These are observations that fit roughly with the idea of at least a lull in the headlong liquidation phase, but they guarantee nothing. Deciphering such clues is like forecasting the weather before radar or telegraphs: Noticing how the wind ruffles the leaves, watching how the animals are acting.

We’re at a point where the market needs to rally soon to interrupt the mechanistic selling spiral, where a fast and vicious rally of even 10-15% would look like a mere rote bounce on a chart.

And we’re at a spot where, if the S&P fails to hold current levels near 2300, the popular next downside technical target of 2150 might not even seem all that scary because it’s “only” 6.7% lower – less than half what was lost last week alone.

What do we do in this world crisis? And how do we prepare so we can take the biggest advantage of this whole situation?

Check out our Personalized Portfolio’s

Only interested in some categories? (Check it out here)

What distinguishes us from others?