Investing for climate change had been a niche on Wall Street, often generating sub-par returns, but in the coming decade it is expected to become a much broader and more critical investment strategy, driven by a new generation of investors.

The millennial investor is the most interested in impact investing, with nearly 90% setting it as a first investment criteria, in an investor survey, according to Bank of America Securities. That contrasts with just under half of baby boomers, who invest with a similar top priority on ESG or environmental, social and governance criteria.

I think in this coming decade, it’s going to be one of the most important elements that investors will start looking at. It’s very key. We saw a massive increase in interest in the last year or so,” said Haim Israel, head of thematic investing at BofA Securities. “It’s not our kids’ and grandkids’ problem any more. People are beginning to understand it’s our problem. It’s in this decade.

BofA estimates in the next 20 years there will be more than $20 trillion of asset growth in ESG funds — equal to the current size of the S&P 500. While that does not measure climate change investment alone, Israel said climate change has become a much higher priorty for BofA clients, who are surveyed periodically on macrothemes. Climate change jumped to the top theme in November, from number five a year earlier.

But investing in climate change-related shares has been far from a winning strategy for everyone. In a study last May, J.P. Morgan analysts found that global pure play climate change funds underperformed by 5% per annum for the past 10 years.

“Despite lackluster impact and returns so far, we do think CC Investing belongs in your strategic portfolio. For one, climate change is accelerating, which is not only raising media and policy attention but also increases the odds of real change in policy, behavior, and technology,” noted the J.P. Morgan analysts. “It should worsen the losses to assets located in regions and sectors vulnerable to adverse weather, such as coastlines and P&C insurers, thus providing diversification benefits from CC investing.”

Even with President Donald Trump’s exit from the Paris Climate Accord, private and public institutions in the U.S. are becoming more concerned about climate change than ever and view it as a more imminent problem. For investors, their view of climate investing may have been to avoid fossil fuels companies but invest in water pipes, power storage, carbon capture and solar panels. But the scope of investment is broadening and climate is expected to be a consideration for every sector, starting with finance, at the very heart of all business.

Earlier this month, for instance, Goldman Sachs CEO David Solomon pledged the investment bank would invest $750 billion through 2030 in initiatives that include fighting climate change. The company is also tightening lending on certain fossil fuel projects, including Arctic drilling.

The Federal Reserve too is expected to become much more involved in assessing climate impacts. In November, one of its 12 regional banks, the Federal Reserve Bank of San Francisco held the Fed’s first climate research conference. The Fed has reportedly discussed getting involved in a global network which includes central banks and regulators, formed in 2017 to discuss climate-related issues and impacts on finance and the economy.

Other central banks have been more outspoken. Mark Carney, outgoing head of the Bank of England, warned this week that the world is in a climate crisis and the financial sector has been too slow to shift its focus away from fossil fuels. Carney has instituted stress tests for U.K. institutions and sectors to see how they could be impacted by climate. His next position will be with the United Nations as special envoy for climate and finance.

Grant Thornton chief economist Diane Swonk said the Federal Reserve is likely at some point to include climate exposure impacts in banking industry stress tests, as the European Central Bank does.

“The Federal Reserve in particular is concerned about how our financial system will deal with extreme weather… [Weather] affects everything from insurance to bank portfolios,” she said. “It’s not a tomorrow problem. It’s a today problem. Once-in-a-100-year-storms are coming every year now. Whether you believe in it or not, it’s something you should hedge against.”

Extreme weather, in increased fires and drought, hurricanes and flooding, is making its own case for investment.

“This is real money. It means real money, a real loss of money and real opportunity,” Swonk said. “What you’ve got at the end of the day is money talks. If people won’t listen to mother nature, they will think of the greenback.”

Even before the climate movement was personified by Swedish teenager Greta Thunberg, younger investors have been seeking ways to invest in climate causes.

Jack Ablin, chief investment strategist at Cresset Wealth Advisors, said his baby boomer aged clients were looking for ways to invest when they were younger, and many of those investments didn’t really pay off. He is now looking at water and water infrastructure, both through stock and private investments.

“Water has been a big retail stock broker theme for years during the ’70s and ’80s and nothing really came of it. The older investors are somewhat skeptical because the story never played out. The younger investors never heard the story, and they’re looking out into the future, thinking there is an issue here,” he said.

J.P. Morgan strategists analyzed the decade long performance of climate-related investments and found the biggest laggard was alternative energy, which actually declined by several percent over the past decade. 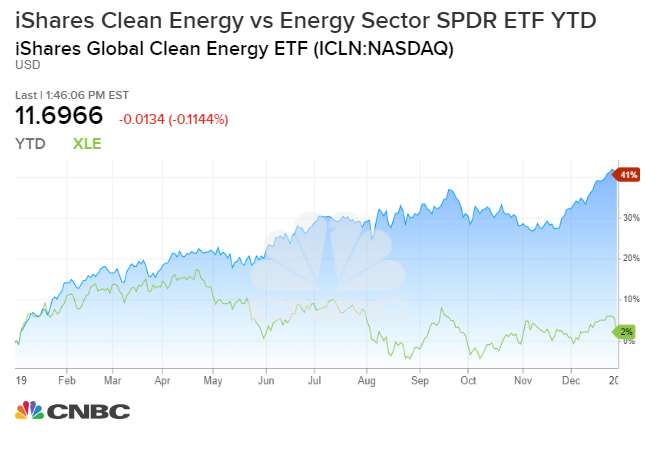 They said the JP Morgan MSCI low-carbon equity indices generated only a 17 basis point outperformance in the past s decade, before fees.

“Its Global Environmental Index underperformed by 1.2% pa since inception in 2010. The five thematic sub-indices of this index show that those arguably most related to Climate Change—Alternative Energy and Sustainable Water—performed worst, and those furthest removed—Pollution Prevention and Green Building—did best,” the analysts wrote. They noted that MSCI launched a Global Climate Index in 2005 that underperformed by 34 basis points through the end of 2017, but it was since discontinued.

Israel argues that more investment dollars are coming into climate-related investments and that should make them more attractive. There have also been advancements in technology, so green building, developed because of extreme storms, wind and flooding, is taking off.

“Back in 1980, 0.2% of the planet was exposed to extreme weather. Extreme weather is everything— hurricanes, droughts, frost, extreme winters, extreme heat— and now it’s at 12%,” he said.

For a variety of reasons, traditional fossil fuel energy companies in the S&P energy sector have also lagged. The sector is up just 5% versus the 188.5% gain in the S&P 500 in the last decade. Energy companies have even lagged the gains made by the oil commodity recently, as investors view them as risky, demand better returns and penalize them for high debt and overspending on development.

“Renewable energy is cheaper to produce than fossil in a lot of places in the world,” said Israel. “We think with energy storage,we are also seeing better outcome, and it is getting cheaper.”

Israel said investments were assessed in the past by the cost of oil. “When energy prices were low , the incentive to invest in renewable energy was low,” he said. Things are changing, however. “I think the perception was that climate change was for later generations. ‘We have time.’ Now I think the perceptions is that things are changing very fast. ‘We don’t have time any more,’” he said.

ESG investing has made investors more focused on sustainability and impact more than they would have in the past, and that is expected to continue to spread and expand, Israel said.